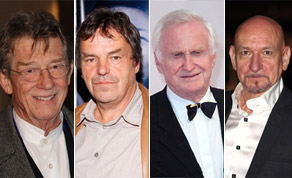 John Hurt, is attached to play Jones’ father in the film “Broken Dream” which will begin filming in september in eastern europe.

John Boorman has described Broken Dream as the story of “a man, an illusionist who discovers how to make objects disappear, completely disappear, so that everything material becomes a spirit.” John Hurt (Tinker Tailor Soldier Spy) is attached to play Jones’ father in the film and casting for the female lead is underway.

The film was due to be produced nearly twenty years ago with River Phoenix (Stand By Me) starring as the lead, before the actor’s untimely death.

John Boorman and Neil Jordan are currently in pre-production with ‘Broken Dream’, a feature film written by the men in the late 1970s.  It is now lined up to shoot in Eastern Europe this September with both Ben Kingsley (Shutter Island) and John Hurt (V fro Vandetta) attached to the project thus far.